More
Roster Set, Braves Ready To Get Down To Business

An 8-4 defeat to the Detroit Tigers, Saturday, signalled the end of a long Spring Training for the Atlanta Braves as the team prepared for the short flight to Philadelphia and opening day.  It had been known for some time that Derek Lowe would get the nod to start this first game of 2009, but the rest of the roster was something of a mystery until this weekend.

To some, Bobby Cox's final 25-man roster was as expected, but others would have been pleasantly surprised to find out that rookie, Jordan Schafer, was named the everyday CF.  Schafer's Spring performances have certainly been deserving of a place on the roster.  He hit for .333, with 22 hits and also stole five bases.  Since Josh Anderson's trade to the Tigers, the Braves were looking for a suitable replacement in Centre.  Schafer certainly fits that billing, and despite serving a 50 game ban last year in the minors for alleged use of HGH (Human Growth Hormone), he seems mature enough, confident enough and above all, ready to rise to the challenge.

Much of the roster picked itself.  Tom Glavine is still on the disabled list, but is slated to start his first game on April 18th.  Until then, Jorge Campillo will take the fifth starter's role, much as he was able to last season.  The last of the cuts to the roster saw Manny Acosta, Boone Logan, Brandon Jones and Gregor Blanco optioned to AAA Gwinett with Kris Medlan, Conrad Brooks and J.C. Boscan reassigned to minor league camp.

What the Braves are looking for above all else this year is a consistency in the lineup, which they should be able to get this year.  The new-look rotation was partly selected for its durability, whilst the batting lineup blends the right mix of youth and experience together, if somewhat lacking in true power.

So Derek Lowe will finally throw his first real pitch in anger in a Braves uniform tonight.  He finds himself opposing Brett Myers for the Phillies; filling in for Cole Hamels, who is recovering from inflammation in his pitching arm.  Lowe is looking to banish the ghost of last year's play-offs in which he went 0-1 with a 3.48 ERA in two starts for the Dodgers against the Phillies.  Nonetheless, he is 2-0 with a 2.25 ERA in three regular season starts at Citizens Bank Park. 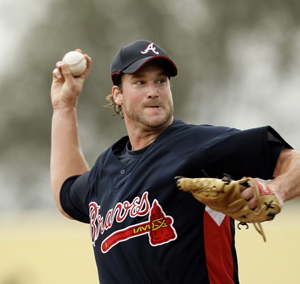