It was a pitching duel as long as it lasted, but Atlanta couldn't muster enough to beat the Colorado Rockies and former Brave, Jason Marquis, Monday night.  Derek Lowe took the loss in a 5-1 defeat, though pitched one of his best games of the year so far, giving up just two runs in eight solid innings.  Lowe's form had been generally good coming into Monday's matchup, and he had been rewarded with some run support in his starts and led the team with five wins.  Lowe was seeking his fifth win in a row. 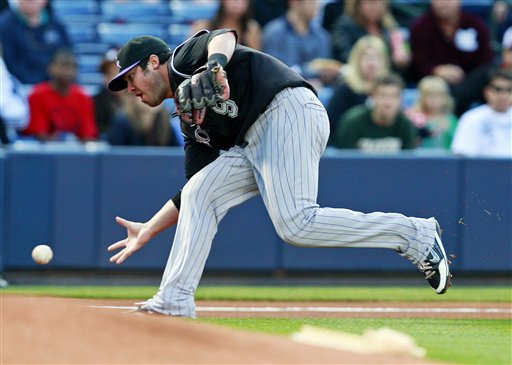 The game though did not go as planned.  Anxious to get back to winning ways after Saturday's heavy defeat to Arizona and Sunday's rainout, the Braves could only gather together five hits off an impressive Jason Marquis.  Though Colorado only managed one more hit than Atlanta, they were able to score five runs in the game, the final three coming in the ninth inning off relievers, Eric O'Flaherty and Pete Moylan.  The game echoed of April - a month in which quality starts went unsupported and close games became walkovers when handed to the bullpen.  Braves manager, Bobby Cox vented his frustration after the game, "You hate to lose a game like that," Cox said. "Lowe didn't give up anything that was hit hard."

As much as the bullpen cost the Braves the game, a lacklustre offense must shoulder equal responsibility.  After a bright start, Jeff Francoeur has slumped to a .247 average and went 0-3 on the night.  Jordan Schafer is fast approaching the Mendoza line at .215 and Kelly Johnson leads off with a .225 average and .306 on-base percentage.  All are statistics which are not good enough at the Major League level.

The Braves' fielding too let them down on Monday night, committing two more errors and letting good opportunities slip through their fingers.  1st baseman, Casey Kotchman, had a chance to make a play at the plate to save a run, but threw high to McCann, who was thus unable to apply the tag in time.

Ultimately, this was another game to forget for the Braves.  They can now only look forward to the rest of this four-game series with optimism and confidence of better performances.  Tuesday night's game sees Jair Jurrjens look for only his fourth victory, despite the rotation's best ERA.  Jurrjens (3-2), takes on Colorado's Jason Hammel (0-2) from 7pm at Turner Field.