The Braves got back to winning ways on Tuesday, providing starter Jair Jurrjens with enough run support to get his fourth win of the campaign.  The Braves downed the Rockies 8-1 to tie the four-game series at 1-1.  Over recent weeks, Jurrjens had been increasingly frustrated by the lack of run support received.  Despite boasting an ERA of under 2.00, he went into Tuesday's matchup with just a 3-2 record. 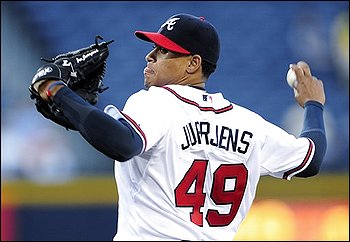 In truth, the Braves have struggled to provide support for all their starters over the opening weeks, but Jurrjens' 3-2 truly disguised how well the young pitcher had been playing.  True to his early season form, Jurrjens was equally as stingy.  Over seven innings, he gave up just one run on three hits, walking three and striking out eight.  His ERA remains the lowest of the rotation at 1.96.  The eight runs his colleagues put on the scoreboard were more than enough.  "It's like going to the ice-cream store when you're a little kid," noted Jurrjens.

Of course, the game was not just about how well Jair Jurrjens pitched.  In their previous two games, the Braves had been outscored 17-1.  Bobby Cox felt that something needed to be changed up to try and get the offense firing, so he moved Casey Kotchman into the two-spot and had Yunel Escobar lead-off.  Kotchman repaid the favour with three hits (of which two were doubles) and three RBIs.  This took his season batting average above .300.

It was a good night too for second baseman, Kelly Johnson, who went 3-4.  Johnson had come under criticism in recent weeks for his poor form, especially leading off.  Johnson batted 6th Tuesday and seemed much more suited.

The biggest news of the night, however, was on the opposition bench.  A night after being robbed of his career 2000th hit, veteran first baseman, Todd Helton achieved the milestone without any doubt, proving that he has had quality and consistency over his entire career, not just because he plays in hitter-friendly Coors Field.

With the games coming thick and fast now, the Braves continue their series against the Rockies on Wednesday night at Turner Field.  Javier Vazquez (3-3) goes in search of his first home win of the campaign against Jorge De La Rosa (0-3).  The game is a 7pm start.