For some time now, Jordan Schafer's tenure as the Braves' centre-fielder had been hanging by a thread.  Prior to the matchup with the Chicago Cubs, Tuesday, the thread snapped and Schafer was sent back down to Triple A Gwinnett.

This will surely not be the end of the road for the 22-year old rookie, but comes as a huge blow to his confidence as his debut season becomes more of a nightmare than a dream.  It is hoped that the minors will help Schafer rediscover his swing against a weaker standard of pitching and come back into the form that saw him win the centre-field position in the first place. 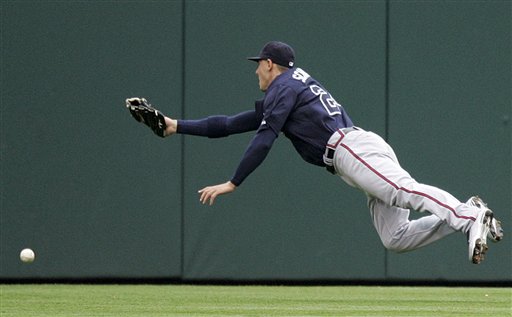 After a home-run in his first major league at-bat, Schafer's season has tailed off.  He lies second in the league in strikeouts with 63, and posts an average just over the Mendoza line at .204.  These poor numbers have not been backed with any power either, with Schafer having hit just one other home run this season.

In his place, the Braves called up Gregor Blanco who, after a slow start, has started to show some form at the Braves' Triple A affiliate.  He will go straight into the team to face the Cubs.