The Braves offense continued to roll Friday as they downed the Boston Red Sox 8-2.  This Jekyll and Hyde team showed once again they could compete with the very best and with former player, John Smoltz, watching from the opposing dugout, one of his replacements pitched a game the veteran would have been proud of. 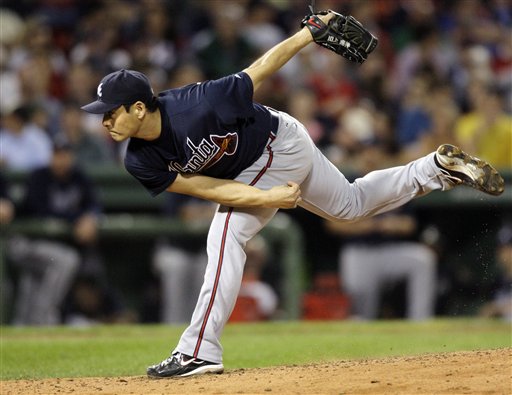 Kenshin Kawakami went into the game with a 3-6 record, though had been pitching well of late.  In each of his last two games, Kawakami had left with the lead only to see it blown by the bullpen.  Friday's game was a different matter though as by the time Kawakami entered the game in the bottom of the first inning, he already had a two run lead thanks to Nate McLouth's first pitch home run off Daisuke Matsuzaka and a poor first inning from the man known as Dice-K.

Matsuzaka had control problems all evening before being lifted by Sox' manager, Terry Francona in the fifth inning.  In the first inning alone he gave up three hits and two walks before he even retired a hitter.  He was lucky to escape the first inning with just the two runs on the board when Matt Diaz struck out and Casey Kotchman lined a hard hit ball straight at Sox' first baseman, Kevin Youkilis, who then doubled up on the helplessly stranded Garret Anderson.

Meanwhile though, Kawakami was having no such problems.  He was stifling the Red Sox' potent offense with ease.  Having struck out the side in the first inning, Kawakami went a total of six innings, for two runs on two hits and three walks, striking out five.  It seemed the only man who could master the Japanese star was Jason Bay, who accounted for both of the Red Sox' two hits.  The second, a two-run home run in the sixth inning proved the only blemish on Kawakami's record for the evening.

Satisfied with the evening's work, Braves manager, Bobby Cox, lifted Kawakami after six innings to save his starter's arm.  Kawakami had only thrown 83 pitches, but has struggled so far this season late into games as he adapts to a five-man rotation as opposed to the six-man equivalent in Japan.  Thankfully for the Braves, the bullpen was in its "taking care of business" mode and picked up where Kawakami left off.  Moylan, Soriano and Gonzalez each threw a perfect inning to close out the game.

After the game, Kawakami spoke about the pressure he felt pitching at Fenway Park, "There was some pressure, because in Japan, they broadcast a lot of American League games, and they don't broadcast many National League games," Kawakami said. "As a Japanese player, with all of the Japanese fans watching, I didn't want to pitch bad".

The Braves' other star on the night was Garret Anderson, who bagged himself four RBIs.  "We were able to keep putting some runs on the board and kept the pedal to the metal," noted Anderson.  The Braves will look to build on the good results of the last two days in Game 2.  Derek Lowe (7-4) returns to Fenway Park for the first time since he was part of the 2004 Red Sox Championship team.  It will not be an easy trip though as he faces Sox ace Josh Beckett (7-3) in a 7:10pm matchup.