The Braves offensive woes continued in Miami against the Marlins, Tuesday, but thanks to Alex Gonzalez’s 6th home run of the season, they escaped with a well earned victory for starter, Tommy Hanson.  Atlanta were held to just two hits by the Marlins pitching, but one of them was Gonzalez’s blast – good enough for a 1-0 victory, condemning Florida to its 6th defeat in a row. 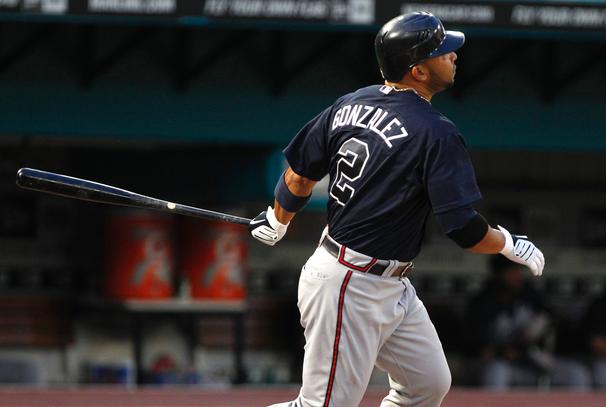 It was fortunate for the Braves that their own pitching was more than a match for the Marlins lineup.  In-form Tommy Hanson got the nod for the start and didn’t disappoint in his six shutout innings.  The youngster, in just his third season for the Braves, picked up his seventh win of the season and is starting to show why the team’s management and fans have so much faith in his ability.  Along with Jair Jurrjens, the top end of the Braves rotation looks set for many years to come.  Hanson gave up just two hits over his six innings of work, but a five walks and six strikeouts meant a high pitch-count and six innings proved his limit.

Nevertheless, Atlanta’s bullpen has been miserly all season long and tonight was no exception.  Eric O’Flaherty, Jonny Venters and Craig Kimbrel combined for three innings of shutout ball to ensure Fredi Gonzalez left a winner on his first return to Florida.

"Once the game got going, I never got the feeling it was going to be a close game," Hanson said. "I was just going out there trying to make pitches. In that sixth inning, I was trying to get out of there without giving up any runs. That's pretty much the bottom line."

The Braves leapfrogged the Marlins in the National League East with the win, taking sole possession of second place, just three games behind the Phillies.  However, the bulk of the work is being done by the pitching staff.  In their past sixteen games, the Braves have scored two runs or fewer on nine occasions.  Concerning too is the batting average of second baseman, Dan Uggla, which dipped to .170 after another 0-3 night.  Uggla has just five hits in his last 63 at-bats. Tomorrow night the Braves send Derek Lowe (3-4) to the mound as they try to cement their hold on second place.  Whilst Lowe has been steady all season, a victory will no doubt require more offensive output than they got tonight.