The Braves beat the Toronto Blue Jays, Tuesday, to win their first Interleague series of 2011 and in doing so gave Mike Minor his first win of the season.  The Braves cruised home 5-1 behind a solid effort from the young pitcher who tossed seven innings, giving up just one run.  At seven innings and 96 pitches, this proved to be Minor’s longest outing of 2011 and came at a time when the Braves needed a strong outing with two of their first choice starting rotation on the disabled list. 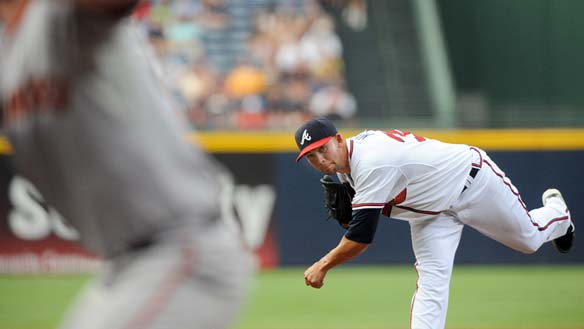 In recent weeks, the bullpen has churned out a lot of innings, both with a higher than average number of extra inning games and some inconsistent starting pitching.  Therefore manager, Fredi Gonzalez, will be both pleased and relieved to pick up the first two games of this series behind solid starts.  Tim Hudson’s eight-inning effort on Monday and Minor’s quality start tonight has given the Braves relievers some well deserved rest.

At first it seemed like Minor’s early-season struggles may continue in the first inning.  The Blue Jays took the lead when Corey Patterson scored from second on an Adam Lind base hit, having earlier doubled.  However, the young left hander composed himself to retire Aaron Hill and end the inning.  The only other issues for Minor came in the fourth inning when he loaded the bases with two outs.  However, fortunately for Minor, the Blue Jays pitcher, Zach Stewart was due up and was subsequently struck out on four pitches.

The strike out of Stewart began Minor’s domination and he retired the next nine hitters he faced to hand over a comfortable lead to the bullpen.  Earlier, the Braves had come from behind to build a 5-1 lead.  Chipper Jones returned to the line-up having missed the previous four games to tie things up in the bottom of the first.  His sacrifice fly brought home Jordan Schafer and gave the veteran his 41st RBI of the season.

In the bottom of the third, the Braves took the lead thanks to Brian McCann’s 12th home run of the season, which scored Jones, then brought home Dan Uggla on an Alex Gonzalez double.  In the fourth inning, Minor helped his own cause by doubling and scoring on Jason Heyward’s one-out single.  This was enough to chase Zach Stewart from the game and give the Braves a lead that never looked in doubt.

"I think he's getting more comfortable, more confident, more understanding of what he needs to do when he gets strike one," McCann said of Minor. "He got so many swings and misses on his changeup."

"It felt nice to finally get a win this year, but mostly I'm just trying to get a win for the team," Minor said.  Selflessly, Minor must now accept a stint at AAA Gwinett however, as Brandon Beachy returns from the disabled list.  "I understand there's not a spot for me,” he noted. "Guys ahead of me are better than me. I'll just go down there and work on things."  Nonetheless, he can be very pleased with his effort tonight and should gain in confidence before his next stint in the Majors.