Braves Lose Out To Pirates in Finale of Classic Series

In what will go down as one of the most memorable series in Braves history, Fredi Gonzalez’s charges couldn’t quite end the 4-game series against the Pirates on a high note, suffering a 5-2 defeat in . Following back-to-back extra innings games, including Tuesday’s 19 inning marathon, the Braves sent veteran starter Derek Lowe to the mound, looking to wrap up a morale-boosting series victory. Going into today’s game, Lowe boasted an unbelievable perfect career record against the Pirates, 10-0 from ten starts. 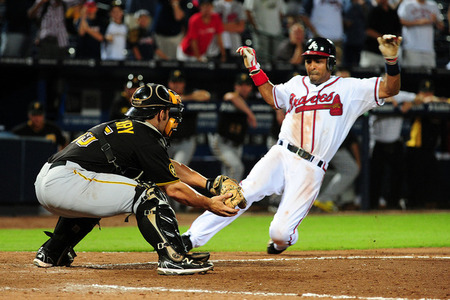 Unfortunately for Lowe and the Braves, this encounter would prove to be a bridge too far, though unsurprisingly, given the way this series has panned out, it was yet another close affair, lengthened by a 47 minute rain delay in the fourth inning.

The Pirates chose All-Star, Kevin Correia to make the final start in the series, hoping to add to his 11 wins on the year. It was the Braves who struck first in the bottom of the first inning. Former Pirate, Nate McLouth scored on Eric Hinske’s ground-rule double to give the Braves their first lead of the series that wasn’t for a walk-off win. The lead was short lived though, as Lowe struggled for control and the Pirates quickly tied things up in the second.

Lowe seemed to settle down slightly after this, escaping the third and fourth innings unscathed, but the rain delay disrupted his rhythm and upon coming back for the fifth inning allowed three consecutive hits and a run to begin the inning, followed by an RBI groundout from Pedro Alvarez. Lowe battled through the remainder of the inning, but that would be his night. He threw 105 pitches in his five innings of work, giving up three earned runs on eight hits and three walks. Though Lowe admitted he felt lucky to only have given up three runs, his opposite number was having no such difficulty.

Correia seemed unflustered by the lengthy delay and didn’t give up any further runs until the sixth inning, when Freddie Freeman scored on Dan Uggla’s single. Both Braves players extended their hitting streaks tonight, to 12 and 19, respectively. Following the Braves’ second run of the evening, Correia completed his night’s work by getting Hinske to ground into a double-play and David Ross to fly out to centre. Correia’s gave up nine hits and a walk, striking out three.

It was then over to the reliable Pirates bullpen to finish the job.  Joe Beimel replaced Correia and retired four Braves before handing the ball over to the All-Star closer Joel Hanrahan to record a four-out save, his 30th of the season from 31 chances.  By the time the ninth inning came round, the save was in little doubt for the efficient Hanrahan.  With the Braves bullpen facing exhaustion, Fredi Gonzalez called up Anthony Varvaro from the minors as support and he and George Sherrill combined to pitch the last four innings.  However in the top of the ninth inning, Sherrill gave up a lead-off walk to Steve Pearce and was punished one batter later when Andrew McCutchen drilled his 15th home run of the year over the left-centre field wall to make it 5-2.

Though the loss was disappointing, a split series was probably the right result for such a hard-contested series.  "Basically, we played these guys five times, more than five times," said Lowe. "Both teams probably thought they should have won all four. I bet they'd say the same thing. Every game was nip and tuck. We fell short today and they got a lot of big hits."

The Braves now move onto a three-game series against the much-improved Florida Marlins, whilst the resurgent Pirates travel to to take on their rivals where the Braves hope they can do them a favour.  "They're a real good team," noted catcher David Ross. "There's a reason they are tied for first place, or a game back, or whatever. They're playing well and they know it. You're able to pitch to them, but they can pitch too. They don't beat themselves like they used to."