More
Braves Walk Off Into Playoffs

With one swing of the bat from Freddie Freeman, Tuesday, the Braves erased the painful memories of 12 months ago by surging into the 2012 postseason with more than a week to spare.  Freeman’s two-run walk-off home run gave Atlanta a 4-3 victory over the Miami Marlins and in doing so, secured at least a wild card spot and won the record-tying 22nd consecutive game in which Kris Medlen started.

"This is the coolest thing I've ever had happen to me in my life," Freeman said. "Words can't really describe it right now. It still hasn't hit me yet. This is a dream come true. It's one of the greatest things ever. I just don't know what to say."

Medlen and the Braves had looked comfortable for most of the night.  Seemingly unbothered by the occasion, Medlen continued to pitch with confidence, working his way out of minor jams when they arose.  The only early blemish was Donovan Solano’s first career home-run in the second inning, a solo shot to left field that landed just three rows deep.  That home run gave Miami the lead, but it was short lived.  Opposing Medlen was Nathan Eovaldi, who had held Atlanta scoreless for eight innings just eight days ago.  Eovaldi impressed again, but after walking Chipper Jones to begin the second inning, back-to-back singles from Freeman and Dan Uggla brought home the tying run.

The game then became a pitching duel between two excellent young starters.  After five innings, each had given up just one run on three hits and Eovaldi had eight strikeouts to Medlen’s seven.  The Braves forced home a run in the sixth when Jason Heyward tripled and then scored on Jones’ sacrifice fly.  Incidentally, Jones too is close to a record.  That RBI brought him to within two of Dale Murphy’s franchise record for most RBIs against a single opponent.  Murphy had 168 against the Padres in his Braves career.  Jones has two games remaining against the Marlins. 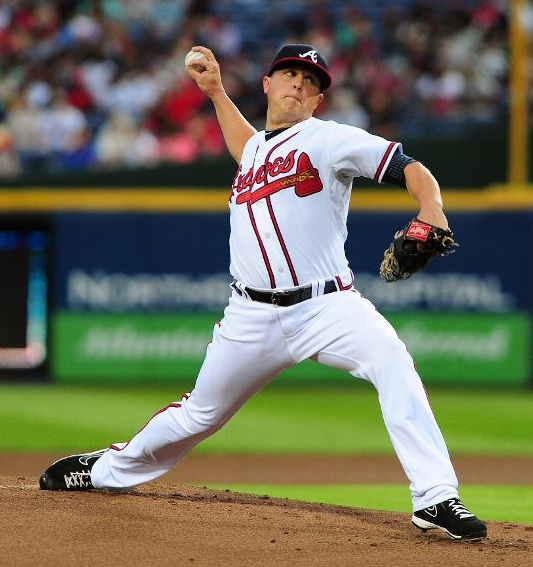 Entering the seventh with a 2-1 lead, Medlen began in confident fashion, striking out Jose Reyes for his eighth of the night.  However, an innocuous two-out single by Greg Dobbs proved catastrophic when Solano doubled his career home run tally with the next at bat.  Solano is now 4 for 7 with two home runs against Medlen.  The young starter recovered to complete the inning, but left the game shortly after, on the hook for what would have been only his second loss of the year.  "Guys have just played their butts off, and it's gotten me this little streak thing," Medlen said. "I'm just excited. You give up a few runs and the guys battle back for you."

For a while it appeared that the winning streak would indeed come to an end.  A scoreless seventh and perfect eighth inning had the fans anxious.  Yet Eric O’Flaherty and Craig Kimbrel kept things tight at the other end, setting the stage for the ninth-inning heroics.  Eovaldi was unlucky in his last start against Atlanta when the Miami bullpen blew his victory chances and it was to be the same story again.  Leading off the ninth, Jones doubled off former Brave, Mike Dunn, and advanced to third base on a wild pitch.  Freeman then sent Atlanta to its second postseason appearance in three years with a monster drive over the wall in centre field.  The win erased the memories of the nightmare finish to 2011 and etched Kris Medlen’s name into the Major League record books.

"You don't know whether to laugh or cry or look for somebody to hug or slap in the back," acknowledged Braves manager Fredi Gonzalez. "This is special. You've got to give a lot of credit to those guys out there. After what we went through in September of last year and then for them to come out and win 89 games or something like that and we've still got a chance to get a few more and win a division, those guys are awesome."

The next task for the Braves is to try and catch the Washington Nationals, who lost in Philadelphia.  The gap is at four games, with just eight to play.  "We can go out now and play a lot more relaxed now that we've got a chance to play a postseason game," said Jones. "We’ve got a great opportunity to go out and take it a step further. We're not out of the division yet. Until they close us out, we're going to keep fighting for that top spot."