Braves Win in Toronto Thanks to Homers

The Braves scored an interleague extra innings win North of the Border, Tuesday, beating the Toronto Blue Jays 7-6.  Bouncing back from a 9-3 mauling the previous night, the Braves produced a home run barrage of their own to show they can compete with the American League powerhouses when it comes to scoring heavily.  Despite their lowly status at the foot of the AL East, this was a Blue Jays side, packed with powerful hitters and who had been playing .500 baseball in the month of May, heading into Tuesday’s clash so the Braves will rightly feel good to leave Canada with a win.

This series with the Blue Jays is the first of a new initiative from Major League Baseball, where National League teams play their ‘natural’ American League rivals over four games, with two in each team’s ballpark.  Though the Braves and the Blue Jays have no natural rivals of their own, many still hold memories of the 1992 World Series played between these teams, which was won in six games by Toronto.  Seldom since following up with their second World Series crown the following year have the Blue Jays been one of baseball’s top teams, but 2013 was supposed to be the year they returned to their former glory when they added R.A. Dickey, Josh Johnson, Mark Buehrle, Jose Reyes, Melky Cabrera and Emilio Bonifacio to their roster.  Yet despite becoming one of the American League’s big spenders, the team has struggled to settle and remains in last place.

The Blue Jays sent Brandon Morrow to the mound to face Paul Maholm and the game started with a bang.  Immediately the Braves showed their intentions when Jordan Schafer led off the game with a double.  Andrelton Simmons moved Schafer to third with a hit before Freddie Freeman continued his good form with runners in scoring position, scoring both runners with a hit.  Freeman later came around to score on a throwing error and the Braves handed Maholm a 3-0 lead to work with.

Maholm however has struggled away from Turner Field and the left-hander immediately surrendered five hits and four runs in the bottom half of the inning.  Obviously I wish the first inning would have gone differently, just because we put up three in the first,” Maholm said. “But I was just going to go out and try to make an adjustment, make my pitches and get some ground balls, and let the guys make some plays.  You could tell after the first inning that both teams were going to score some runs.”

Parity was restored in the top half of the second inning though, when Schafer followed up his first inning double with his second home run of the season, a solo shot that easily cleared the right field wall.  Maholm was able to battle on through six innings and only allowed one further run.  He mistakenly hung a breaking ball over the plate to Jose Bautista and the Dominican punished him by sending the ball into the upper deck of the Rogers Centre.  The home run was Bautista’s 12th of the year.

Maholm would leave with the lead though, thanks in part to the 12th home run of one of his teammates.  Continuing his incredible story, Evan Gattis led off the sixth inning by pulling a Ramon Ortiz fastball into the left field stands.  The Braves then went back-to-back when Brian McCann followed suit and Maholm had an unlikely 6-5 lead.  He left the game charged with five runs, all earned on 10 hits and a walk.  "Paul did a terrific job for the way that first inning went for us," manager Fredi Gonzalez said.  "We went out and scored three runs, and then we didn't particularly play well behind him."

Over recent years, giving the Braves the lead after 6 innings usually meant it was lights out, with their vaunted bullpen trio of Eric O’Flaherty, Jonny Venters and Craig Kimbrel.  But with O’Flaherty and Venters out for the season after undergoing Tommy John surgery, the Braves ‘pen seems a little thin on the ground as they rely on youngsters to get the job done.  Tonight was one of those times when plans went awry.  Bautista led off the bottom of the seventh inning with a double off Anthony Varvaro and scored when catcher J.P. Arencibia drilled a pitch all the way to the wall for an RBI double. 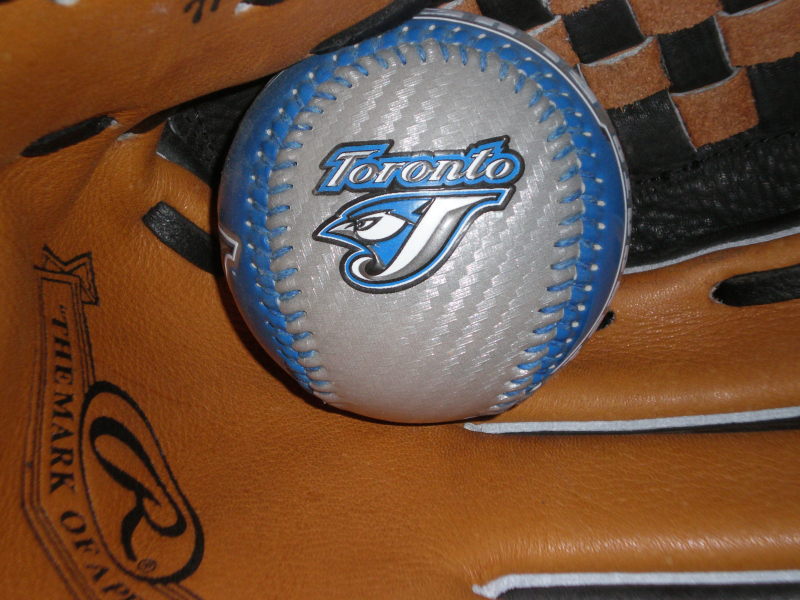 But thank heaven for the veterans.  As the game went into extra innings, McCann and Kimbrel proved the heroes for Atlanta.  In the top half of the tenth inning, McCann belted his second home run of the night and then Kimbrel closed it out for his 16th save of the season.  “That middle of the lineup, those big three with Freeman, Gattis and Mac, did a hell of a job for us,” Gonzalez said. “Kept us in the game with those home runs, and got us ahead a few times. Too bad we’re not in the American League.  We’ve got to go back and play National League, but it’s nice to have those three all in the lineup at one time.”

The series now heads back to Atlanta where the Braves are a beastly 15-5 on the year.