April 4th 2011 was the last time the Braves won in Milwaukee.  Home runs from Martin Prado and Dan Uggla decided the game that day before the Braves embarked on an 8-game losing streak at Miller Park, spanning more than two years and in which they could only muster a total of 9 runs.  However, the hoodoo was broken, Sunday, when the Braves’ bats finally came to life and they departed Wisconsin with a 7-4 win over the Brewers. 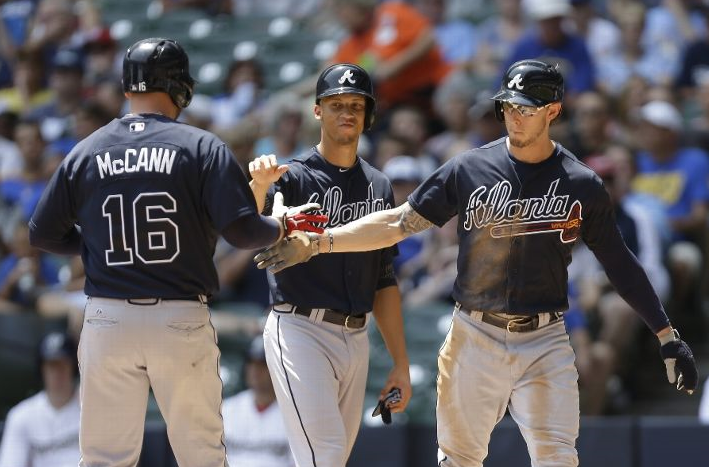 Dating back to the third inning of Thursday’s game against the Mets, Atlanta’s offense had a scoreless streak of 24 innings heading into Sunday’s matchup.  Back-to-back 2-0 losses in the first two games of the series against the Brewers had proved frustrating and trimmed the Braves’ lead atop the NL East to five games over the Washington Nationals.  However, it didn’t take long for the slumbering juggernaut to awake as Brian McCann’s inside-out swing for a grand slam to left-centre gave the Braves a 4-0 first inning lead.

The blow was McCann’s eighth home run of his injury-shortened season and the tenth Grand Slam of his career.  "It was big," acknowledged McCann.  "To go to left-centre.  Usually in my career I don't hit the home runs that way.  I'm working hard to stay on the ball, and luckily today I put a good enough swing on it to go that way."  McCann’s home run gave the Braves the lift they needed and the sense of relief in the dugout was palpable.  It set the tone for a 14 hit performance, the most the team has had since May 30th when they hit 16 in a rout of Toronto.

Left hander, Paul Maholm got the ball for the Braves and took his eighth win of the season, although it will not go down as his best ever outing.  Maholm appeared to be cruising before entering the fifth inning, where he gave up a lead-off single to Tom Gorzellany.  Gorzelanny was then retired on a force-play but a double from Jean Segura, a 2-RBI single from Logan Schafer and a two-run blast from Jonathan Lucroy quickly saw Maholm’s 6 run lead become 6-4.  "Unfortunately I let them back in it, but I think it's a good way to get us going and get us back to where we need to be," Maholm said.

Maholm recovered to complete the inning without any further damage, but he would not return for the sixth inning.  Charged with four earned runs on eight hits, he then handed the ball over to the bullpen to finish the job.

"Just to get a win today was huge," McCann said. "If you look back at our season we've had so far, we've run off some streaks. We've lost a couple in a row here, but all in all we're having a really good year. Sometimes we're going to go through stretches where we don't play great baseball, but that happens to every team in the league."  Despite the offensive eruption, the team still managed to strike out 11 times, with Uggla (3), BJ Upton (2) and Jason Heyward (2) the usual suspects.  Nonetheless, the team now moves onto Kansas City in a buoyant mood.  The win, coupled with a loss for the Nationals increases the lead in the NL East back to six games.